Abhishek Bachchan, who was last seen in Housefull 3 (2016) is gearing up to return to the big screen.

The film is being directed by Anurag Kashyap and also stars upcomers Vicky Kaushal and Taapsee Pannu in pivotal roles. Taapsee in an interview to IANS had said the film “is a beautiful mix of the different worlds of filmmakers Aanand L. Rai (the producer) and Anurag Kashyap”.

“It’s a typical Anurag Kashyap style of love story, where you do not have black and white characters. Everyone has certain flaws. And of course Rai is known for these small time town beautiful (stories),” she added.

No release date for Manmarziyan has been announced yet. 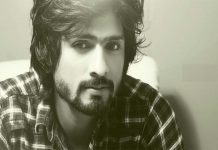